MEETING OF AKBN WITH INTERNATIONAL PARTNERS, FOR RENEWABLE ENERGIES

MEETING OF AKBN WITH INTERNATIONAL PARTNERS, FOR RENEWABLE ENERGIES

… Adrian Bylyku ​​calls on partners, “Albania, a fertile environment for your projects”

On July 6-7, 2021, AKBN organized a Hard Talk meeting on “Renewable Resources, harmonization of our electric power system under the introduction of new photovoltaic capacities”, in cooperation with the United Nations Economic Office (UNECE) , The German Energy Agency (DENA), the Community of Renewable Energy Sources, REN21, as well as the German Federal Ministry for Economic Affairs for Renewable Energy . The meeting was also attended by representatives from the Ministry of Infrastructure and Energy, institutions  like; KESH OSHEE, OST, ERE, EBRD, interest groups and businesses that invest in Albania in the field of renewable energy sources like; Statkraft, Voltalia, consulting companies that provide analysis in the field of energy, etc.

In the opening and welcoming speech held at this meeting, the Executive Director of the National Agency of Natural Resources, Mr. Adrian Bylyku, presented the opportunities offered by Albania regarding the use of renewable resources and invited international partners to develop projects in this field.

He also presented; the role of AKBN on renewable resources as a promotional and monitoring institution and the possibilities to develop renewable resource projects under the support of UNECE, DENA and REN 21, the situation of Albania in the promotion of renewable resources , development strategies on them, access to our energy network concerning problems and their solution, etc. In the framework of the ideas proposed by the Head of AKBN, among other things, it was pointed out that renewable resources should be also object of education in the Albanian education system.

While discussing in this meeting, the UNECE Representative Mr. Gianluca Sambucini, in his speech, among other things proposed to provide ideas on specific projects to be implemented in the upcoming months.

Mr. Michael Hackethal, representative of the German Federal Ministry for Economic Affairs, stressed the continuation of proposals to increase future cooperation on wind and solar energy.

While according to the representatives of REN 21, the whole debate in the future on renewable resources must have the implementation of the Paris Agreement on its focus.

The MEI representative gave an overview of all efforts and steps taken by the Albanian government to enable the diversification on use of renewable resources.

Investment businesses in Albania such as Statkraft, Voltalia through their representatives introduced to the audience the investments made so far in Albania.

At the end of the meeting, the Executive Director of AKBN thanked the collaborators as well as all stakeholders, assessing the meeting as a contribution on innovations in the field of renewable energy. 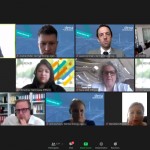