Minister of Infrastructure and Energy Ms. Belinda Balluku signs the restated and amended agreement between MIE and SHELL Upstream Albania on Blocks 2 and 3 on shore

The signing ceremony of the amendment of the Hydrocarbon Agreement on Blocks 2 and 3, on shore, between MIE and Shell Upstream Albania was held at the premises of the Ministry of Infrastructure and Energy with the participation of representatives from SHELL Upstream, Ministry, National Agency of Natural Resources, Albpetrol, civil society, as well as the media.

In her speech Minister Belinda Balluku made a short interesting resume of the history of the sector and the achievements made so far in the field of oil and gas in Albania which is a valuable aspect to be shared with that part of the public opinion that are not aware of the historic course of the hydrocarbon industry. She pointed out: “The oil industry is the earliest industry in Albania, dating back to the beginning of the previous century some 100 years ago. Foreign companies discovered at that time that in Albania, a small country in the middle of Europe, there was a hidden treasure which had been blessed by God with a lot of oil and gas reserves.” According to Minister Balluku, this industry reached its peak in the 70s and 80s in Albania.

Minister Belinda Balluku underscored the importance of this agreement as far as the profit of the Albanian state is concerned which occurs as of the extraction of the first oil barrel, considering it another important achievement with regard to the bilateral cooperation and particularly on the modernization of the hydrocarbon sector in Albania. 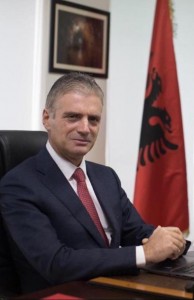